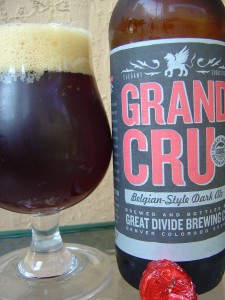 When it comes to beer, Great Divide’s Grand Cru translates perfectly to the case of a classic tragic romance. It is without a doubt one of the finest beers I have ever tasted. During my first encounter with this nectar of the gods, I drunkenly, yet accurately exclaimed, “If liquid gold tasted awesome, this would be the only way to properly describe this fucking beer.” Again, fellow PD writer Stu Thomas and I were in the process of “getting cru’ed” but upon further sober review the verdict still rang true. We had stumbled upon a tremendous moment in our own craft beer discovery journey.

Now comes the tragedy portion, and I feel like a huge ass, because there is practically no way for you to acquire this beer anymore.  According to a former employee at Great Divide, Grand Cru will never be brewed again. Apparently the cost of production massively outweighed the price they felt could accompany such a beer on the market. And to that I say charge $30 a bomber and I’d gladly break my piggy bank to save up for a case. 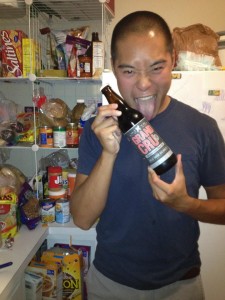 Grand Cru is a dark Belgian strong ale that pours a rich dark brown. Like most dark Belgian strongs, it is prized for its raisin-y, fruity flavors. But what sets it apart from others is the caramel vanilla-y flavors that are woven into the sweet fruitiness. This provides a perfect balance that doesn’t outshine either aspect.

The funny thing is that the last time I had Grand Cru on tap was about a year ago in North Carolina. I had been visiting one of my best college friends who took me to a fantastic beer bar called Tyler’s Tap Room. Grand Cru had been discontinued in Great Divide’s Tap Room two weeks earlier, and yet here I was in Durham, NC enjoying two glasses of this masterpiece.

Up until about a month ago, I also had two bombers in my fridge. (Stored in a maximum security vault like the ones in Fast Five, this vault requires finger print, laser eye scan, voice detection and a secret handshake that only my dog Yoda has witnessed) As alluded to in the PorchDrinking Launch Party recap, I decided to uncork one of those bottles for the epic launch. The other will remain sealed away until my wedding day.

So the story ends here my friends. I do hope that the Great Divide team one day in a fit of nostalgia and wispy salivating taste buds decides to revive this mythical brew. But if they don’t, perhaps the only way you’ll be able to try this last batch of awesome would be to find yourself as my future bride. Applications are currently being taken 😉 !