Everyone’s journey into craft beer begins differently. Perhaps you favored light beers and then one day stumbled upon a particularly refreshing Kölsch that made you look towards beers not readily available in the supermarket coolers. Or maybe it was a break you took from Blue Moon to try that German hefeweizen. For me, the turning point came with my first taste of La Chouffe. There was just something about that gnome that changed me. So when I learned that Brewery Ommegang teamed up with my favorite little gnome to brew the adorably named Gnomegang Belgian Blonde Ale, I knew great things were ahead.

Gnomegang is something I have been looking forward to drinking for quite some time. First brewed in 2010, I realize I am behind on this game. The original Chouffe had already gotten me into plenty of trouble (I mean, because of it I’m here, on the Internet, peddling my views of craft beers to you fine readers.), I was sure this more experimental version would prove just as dangerous. I will admit I was a bit nervous to try it, considering all of the build up and anticipation. Akin to a promising first date, but not quite so many jitters or accompanied by the usual stressing out over which outfit to wear (Are jeans too casual? Dress too formal? Tuxedo t-shirt too want-to-be-formal-but-I’m-here-to-party?). Thankfully, my gnome will never judge my fashion choices.

My Gnomegang came in a regal looking 750ml bottle sealed with a cork. As I generally favor bottles sealed with corks (champagne, among my absolute favorites), my foray into Gnomegang was already going splendidly. With the cork popped, the beer pours a bright golden hue, flecked with only the errant bit of sediment. The bubbles are copious at first, but dissipate after a few minutes out of the bottle. The nose gives me exactly what I am looking for: bright fruit and spice, a muted bit of sour, and a hint of breadiness. Immediately, the taste of fruit and spice are apparent, mainly banana, clove, and a hint of pepper, followed by just enough malty caramel for a balanced flavor. This beer has a sweetness that isn’t too powerful my taste, and makes me want to come back for more. Though just as with gnome #1, this boy clocks in at 9.5% ABV, which will certainly find plenty more trouble for me to get into. Once again, the gnome did not disappoint. 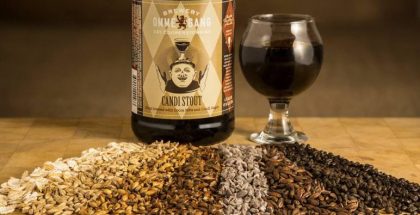