Jackie O's Elle is a foudre-aged, mixed culture saison named after the brewery's "L" shaped mixed fermentation room. We picked up this bottle when we were in Athens, Ohio, for Ohio Brew Week, and cracked it open on a sunny August afternoon last weekend. The nose brings aromas of yeasty, raw bread dough and white Riesling wine, with some young wood and minerality in supporting roles. The flavor is assertively tart, with a lovely pilsner/wheat foundation (Jackie O's doesn't disclose their grain bill for this, so it might be all malt, but I think I pick up some wheat along with the very pale barley). The beer finishes very dry, showing how busy that mixed culture has been. This was a lovely beer for a sunny afternoon, and the pale, cloudy body even shined harmoniously with the weather. Cheers. 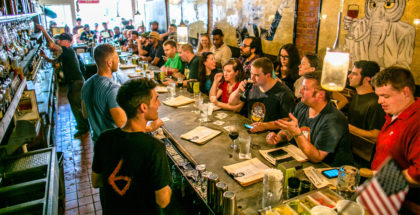