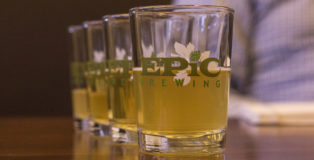 When Epic Brewing first released its Sour Brainless on Peaches in late June 2015, the brewery’s sour program was officially launched. I remember going to the first release at the Denver taproom, where I was able to hand-dip the wax on my bottles, enjoy free peach ice cream from Little Man with flame roasted peaches, and also get my first taste of Epic’s sour peach. In the two years since the initial release, Epic’s sour initiative has quickly matured into an innovative and well-respected program.