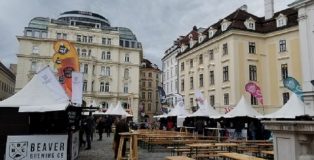 Amidst stunning architecture and a scenic landscape filled with rolling hills, snowy mountain caps, and rushing rivers, lies a long-standing brewing tradition primed for new growth. Austria is home to over 300 brewers now who made 9.8 million hectoliters (there are roughly 0.85 bbls/hectoliter) of beer last year; its people drink more than 110 liters of beer per year – only behind the Czech Republic and Germany for most Europe. Vienna, Austria’s capital, is a fitting image of the current state of the country’s beer scene. Many bars only have taps from storied breweries like Ottakringer or Trumer available. Zwickel, Helles and Pils reign supreme. IPAs are little more than a passing rumor with beers over 6% routinely raising eyebrows. It’s a city fixed between consistency and curiosity. All of these market factors were on display when I visited the Wiener Bierfest recently, just steps from the historic St. Stephen’s Cathedral.