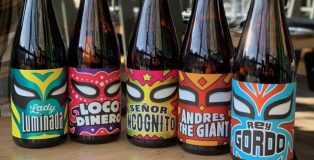 Chicago beer fans are spoiled during this time of year. Between FoBAB and a list of nationally-recognized bottle releases throughout November, there’s never been a better time to be a barrel-aged beer fan. And though Goose Island, Half Acre, Begyle and Revolution Brewing (and more) all make exceptional barrel-aged beers, Cruz Blanca in the West Loop quietly released an equally impressive lineup of barrel-aged beers last year and is doubling down in year two with a bigger and better lineup that can easily challenge Chicago’s best.