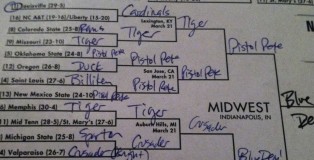 For safety – and science – I made a bracket that was based on my own (mostly safe) picks. And I’m stacking it up against a bracket which – by my own arbitrary determination – asks which team’s mascot could kick the other’s ass. The results are fascinating. END_OF_DOCUMENT_TOKEN_TO_BE_REPLACED