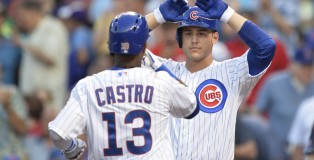 Although the weather in the Eastern half of the United States continues to defy what the calendar proclaims, today is Opening Day.  For Chicago Cubs supporters such as me, this year promises to be the fifth straight season of following a team without contention aspirations.  Despite the promise of various minor league talents that could make their major league debuts this summer, the general expectation is that this Cubs season will closely follow this script. END_OF_DOCUMENT_TOKEN_TO_BE_REPLACED