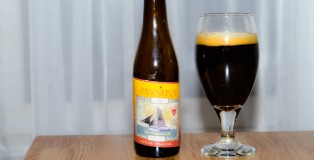 Belgium-based De Struise Brouwers produced this beautiful baby gem known as the “Pannepot.” Since 2003, this beer has been their signature brew among other delightful beers such as the Struisse Rosse and Red Haired Jeanne. I was told by a friend that it was “the best beer the world has to offer,” and after that, I could not refuse. (I mean, how could I?)