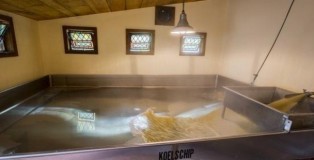 If you’re someone who thinks that Americans created sour, let’s do a real quick crash course in the history of Lambic. What’s Lambic? Only the most important beer style that has led to the sudden explosion in number of “sour” beers on shelves across the country. Lambic is a spontaneously fermented beer that is produced in a region of Belgium called Pajottenland. In a nutshell, spontaneous fermentation is the process of inoculating wort with wild yeast and bacteria present in the brewery’s environment and letting those microorganisms have sole responsibility over fermentation, no added brewer’s yeast or commercial cultures. This is the most traditional way of creating acidity in beer and is the predecessor to modern production of sour beer. END_OF_DOCUMENT_TOKEN_TO_BE_REPLACED