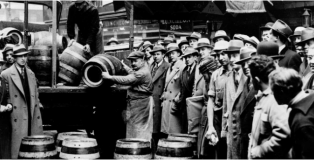 “I think this would be a good time for a beer,” exclaimed Franklin Roosevelt after signing the Cullen-Harrison Act on March 22, 1933. Though the passage of the 21st Amendment in December 1933 fully ended the nation’s temperance experiment, the Cullen-Harrison Act allowed for the legal sale of low-alcohol beer (and wine). It went into effect on April 7, 1933, a day we commemorate as National Beer Day.