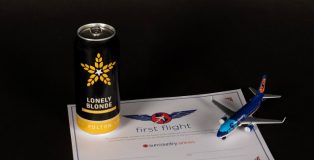 I grew up in Minnesota but currently live in Chicago. This means that I often fly back to Minnesota for family occasions and holiday gatherings. The sub-hour long flight has just enough time for one round of drink service in the cabin. Typically, I opt for whiskey or plain water given the lack of craft beer offerings on most airlines. Now, that might all be changing. A few weeks ago, Minneapolis-based Fulton Brewing announced that Sun Country Airlines would be offering their Lonely Blonde Ale on flights for the first time alongside their current craft option, Surly Brewing’s Furious IPA. It’s an exciting move that shows airlines aren’t averse to the changing drinking demands of consumers. I spoke with a few airlines along with Fulton to get more info on how these partnerships work and what beer drinkers should expect on flights.