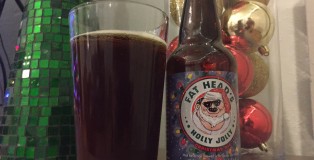 When kids think of Christmas, they generally think of a jovial fat man and the presents he bribes in return for good behavior. Although it wasn’t for good behavior, I was rewarded a 6-pack of Fat Head’s Holly Jolly Christmas Ale from my older brother because my Indianapolis Colts stomped on his Cincinnati Bengals earlier this season. END_OF_DOCUMENT_TOKEN_TO_BE_REPLACED