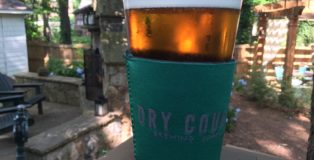 Pick your cliché: Rock. Dart. Dead Cat… throw any one of those items around Atlanta and chances are good you’ll hit an up-and-coming brewery. After all, nearly 30 have popped up around the state since 2010. Now you can add Dry County Brewing Company, based in Kennesaw, Georgia, to that list. Although they went online in November of 2015 with a five barrel system, expansion plans are in the works. Their future is bright. They’re all wearing sunglasses.