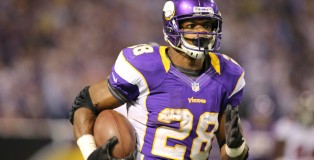 If you have the first pick in your fantasy football draft you’re most certainly taking Minnesota running back Adrian Peterson. There’s no one coming off a better season than him and he’s poised to have even bigger numbers this year. But if you have the second pick in the draft who do you take? PorchDrinking.com’s sports writers discussed: