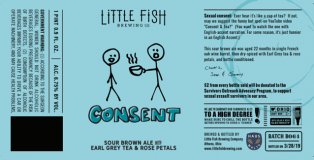 Ohio’s Little Fish Brewing has partnered with a non-profit group supporting survivors of sexual assault to promote the importance of consent.

For the last two years, this brewery from the small college town of Athens has worked with Survivor Advocacy Outreach Program (SAOP) to release Consent, a barrel-aged sour ale brewed with tea. The beer was released on draft during Sexual Assault Awareness Month (SAAM) in April, and was released in bottles for the first time during the last week of November.