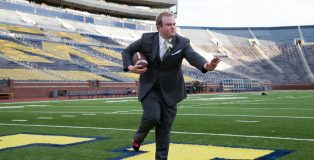 This article is written by Kyle Van Deventer, Former Director of Sales for Griffin Claw Brewing Co. and originally appeared on Better on Draft

Craft beer is an industry filled with thoughts of endless streams of alcohol, beer dinners galore, festivals every weekend (sometimes multiple) and just pure gluttonous behavior. As someone who has been in the industry for over 12 years and having known nothing but this behavior, the illustrious vision of others was becoming a stigma for me. As a 33-year-old father now, my health isn’t the greatest. My goals aren’t the same as they were when I was 21, and staying out at a bar isn’t what I would call a good time anymore. There needed to be a change, but I caught myself wondering how I could make that change. It started with plenty of fears both professionally and personally. Having the fear of missing out, the fear of peer and customer opinions and the fear of perception, kept me from making any change. That is until I went to get a check-up.