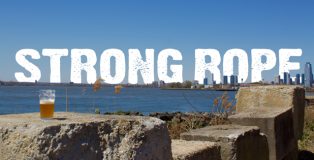 It’s highly unlikely that Strong Rope Brewery owner Jason Sahler envisioned barley and sailboats when he earned his Sustainability degree from New York University. Yet there he was several years later, receiving a delivery of New York State grown barley that had been sailed down the Hudson River to his brewery in Brooklyn. It’s just one example of the unanticipated ways Sahler applies his sustainability background to his business. END_OF_DOCUMENT_TOKEN_TO_BE_REPLACED