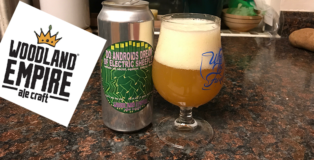 If you have yet to try a craft beer from Boise, you may be in good company. However, Boise, population 205,000, is a small city only 5.5 hours from the lush hop fields of Yakima Valley and less than an hour from the Oregon border. Also, let’s not forget that Idaho is also officially part of what we consider the “Pacific Northwest” region of the United States. Hence, when you’re a brewery that’s in direct competition with the tasty beers of Washington and Oregon, you have no choice but to bring your A-game and that’s what Woodland Empire Ale Craft does with its “Do Androids Dream of Electric Sheeple?”