For this week’s beer showcase, I present a twofer. That’s right, two beers in one. A Black and Tan (porter and pilsner) from Mississippi Brewing Company in Utica, NY called Mississippi Mud. This is another find from Jungle Jim’s, an impulse buy, if you will. Unfortunately, the only thing good about it is the cool one-quart jug it comes in. It’s dark brown in color with little head and no lacing. And quite honestly, I think it tastes like the dirt it’s named after. It’s got hardly any flavor, meaning that it has been extremely watered down. My boyfriend didn’t really care for it either, but I guess when you only pay $2 for 32oz your expectations shouldn’t be too terribly high.

From what I’ve seen on the web, this beer is quite elusive, as is it’s brewer. Some say it’s contract brewed by Matt Brewing Company, the same brewery responsible for Saranac. However, there’s no real evidence of this that I can find. Contrary to my review, people online can’t seem to get enough of it, especially those who can’t find it, so perhaps it’s just me. Or maybe I just got a bad batch. If you’re a Black and Tan fan, give it a try. I’d be anxious to hear what you think. 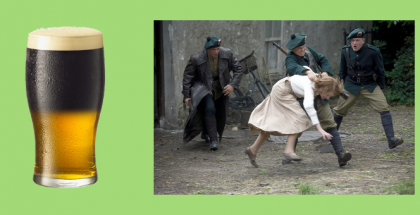