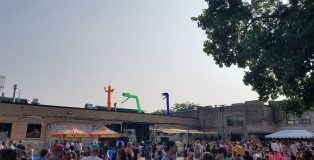 This past Saturday, beer fans from across Chicago (and the larger U.S.) made the trek to Half Acre’s Balmoral home to partake in the burgeoning beer fest called The Big North. Half Acre has hosted this event for three years running now. Each year is bigger, each year is better, and each year, the beer list grows to eye-popping quantities. The third iteration of Half Acre’s beer celebration did not disappoint as hundreds of sudsed-up beer fans took in a picturesque summer evening across Half Acre’s ever-expanding campus. The event is special for many reasons, but it’s also an important milestone for Half Acre’s self-titled pursuit of “duality,” which means that they’re able to make enough mainstream brews to keep business moving, while also keeping their creative and experimental programs producing at a high clip. The result of Half Acre’s pursuit was witnessed on Saturday, and boy did it taste good.