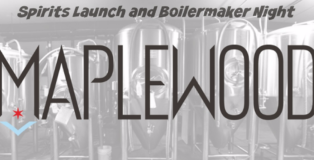 Maplewood Brewery, as it is rountinely referred, officially goes by the name, “Maplewood Brewery & Distillery,” and on January, 18, those in Chicago will finally be able to experience Maplewood’s multi-faceted focus on imbibing. At Chicago’s Fountainhead — a hip craft beer and whiskey bar, one can attend and enjoy what is officially being called, “Maplewood Spirits Launch & Boilermaker Night.”