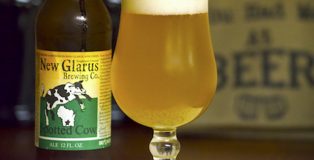 In 2001, I was a bartender at a joint in Wausau, Wisconsin called Loppnow’s Sports Bar. Our main fare was tap and bottled Bud Light and Miller Lite, but occasionally we sold some Mike’s Hard Lemonade, Smirnoff Ice and Blue Moon. I don’t remember how many taps we had, but I recall that only one rotated: usually with Point Lager or a stout that wasn’t Guinness (we had no nitro). These barrels often took a couple of weeks to cash, with one exception – New Glarus Brewing Co.‘s Spotted Cow Farmhouse Ale.