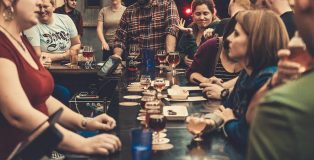 Electricity pulsed through the growing line outside of Fremont Brewing’s Frēlard Production Facility in Seattle, Washington. Growing by the minute, fanatics of Fremont Brewing eagerly hopped up and down, greeted old friends and excitedly developing strategies around bottle purchases. Though it would be a safe assumption that the people in line weren’t strangers to the concept of waiting for craft beer, this line was for a reward much greater than any special release. This line was for the crème de la crème of craft beer events in the city – the Heron Hunting Club’s annual get-together.

This event, put on in celebration of Fremont’s Heron Hunting Club – a group comprised of and dedicated to the breweries’ most loyal and ardent fans, is a prime example of a trend sweeping through craft beer: Programs and clubs, sponsored and created by breweries, that reward their most diehard patrons by offering exclusive, intimate experiences and benefits. END_OF_DOCUMENT_TOKEN_TO_BE_REPLACED