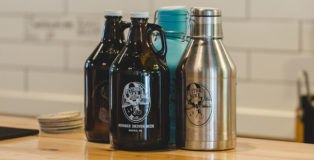 Draft beer almost always tastes better than bottled or canned beer.* It’s fresher and hasn’t been exposed to heat, light, or oxygen—elements that can have a major negative impact on the beer’s taste and aroma. Despite the superiority of draft, we don’t always feel like going out for a pint. As a self-proclaimed introvert, I’m a prime example of a beer enthusiast who sometimes just wants to chill at home and watch a movie. Or read. Or drink a few beers while I cook dinner. This is when growlers come in handy. Typically 64 fluid ounces (the equivalent to 4 pints) or 32 fluid ounces (2 pints) breweries and taprooms will happily fill growler jugs with fresh, tasty, draft beer and allow patrons to grab quality beer to go. END_OF_DOCUMENT_TOKEN_TO_BE_REPLACED