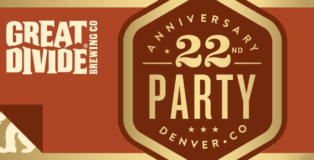 Great Divide may be one of the original gangsters of Denver’s craft beer scene, but in a lot of ways, it’s still evolving. 2016 will mark the first anniversary of Great Divide’s Barrel Bar, their second production facility located on Brighton Boulevard, and the 22nd anniversary of the brewery’s existence. Last year, anniversary goers got a sneak peek in the first phase build out of The Barrel Bar, and this year’s Great Divide 22 Anniversary Party celebration, will feature all the bells and whistles. END_OF_DOCUMENT_TOKEN_TO_BE_REPLACED