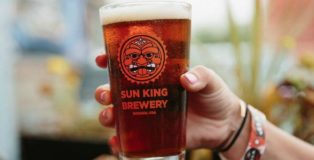 “As a startup, you have the opportunity to self-distribute since nobody knows who you are,” said distributors to Sun King Brewery co-founder, Clay Robinson in 2009. Now, as Indiana’s second largest brewery and with numerous, prestigious brewing medals to its name, plenty of people know about Sun King Brewing.