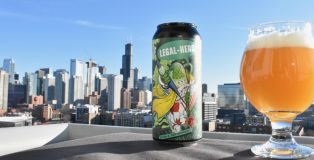 Recreational marijuana became legal in Illinois on Jan. 1, 2020 and it was a big deal. People lined up early in the morning, waiting for hours in order to be one of the first to legally purchase weed in the state, not unlike a beer release. Several breweries were preparing to release a special beer to mark the landmark occasion; the first one released was Revolution’s Legal Hero.