Event Preview | Get Ready for a Rendezvous with Brews 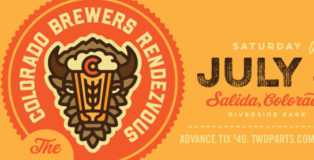 Most beer lovers assume beer fests are for them. Like the liquid smorgasbord is a thank you gift for being loyal craft beer fans. But the Colorado Brewers Rendezvous wasn’t originally intended for you, the beer drinker. Don’t get me wrong, you’re invited now, you’re more than welcome, but initially it was just an annual membership meeting of the Colorado Brewers Guild. When a bunch of brewers gather to rendezvous, though, it’s going to be a party. And parties are meant to be shared.