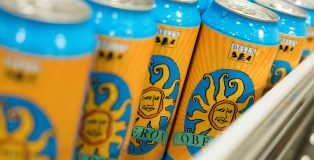 Much like seeing flowers bloom for the first time, many craft beer drinkers associate the beginning of spring with the release of Bell’s Brewery Oberon Wheat Ale. Bell’s signature ale has been around well before craft beer was in vogue, and its popularity continues to this day thanks to a great flavor profile and a myriad of clever marketing tactics – the best being Oberon Day.

The beer was actually called Solsun up until 1998, but a naming dispute with a Mexican brewery prompted the name change to Oberon… and the rest is history. The day-long event celebrating the release of Oberon for the year has become a fan favorite for Michigan beer fanatics and casual drinkers alike. On March 26, Bell’s plans to make this year’s Oberon Day the biggest ever – here are the details.