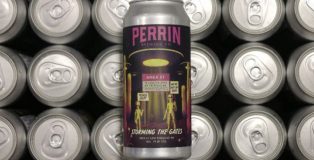 Brewing new beers to celebrate a local event or festival is not unusual in the craft brewing community. Michigan-based Perrin Brewing Company took that idea and flipped it on its head with their latest IPA: Storming The Gates Area 51 Experimental New England style IPA. Brewed in celebration of their 7th anniversary party, the new NE-style IPA is brewed to celebrate (or mourn) the now-canceled Storm Area 51 event that was supposed to take place on September 20, 2019. While that viral event is now no-more due to a myriad of practical and human safety issues, the IPA remains and has had many Michigan beer fans storming the gates of the brewpub this past week.