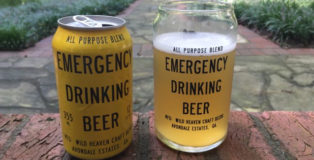 When crafting Let There Be Light, Wild Heaven’s initial low alcohol beer, Nick Purdy, says the main question they wished to answer was, “How much flavor can we jam into a beer with about the same level of alcohol as a Budweiser?” With Emergency Drinking Beer, their Pils-style Session Ale, it seems they ask the same question, but take it a step further. It is a mix between a Pilsner and a Gose, surprising and original. The Gose is there, as is the Pilsner, all to the delight of an easy drinking beer that weighs in at 4% ABV, a harmless day drinking brew. END_OF_DOCUMENT_TOKEN_TO_BE_REPLACED