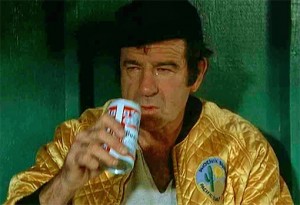 Baseball is back!  This season has me more excited than ever because of 2 reasons.  First, my alma mater’s mens basketball team shit the bed and went to the NIT, then lost in the 1st round.  LAME.  Second, my Red Legs, aka The Cincinnati Reds, are looking primed for another post season run.  Hopefully, they won’t lose in the divisional series like last year.  Baseball and beer go together like “peas and carrots”, to quote 1 of my favorite movies.  Some of my best adult memories involve baseball and consuming (I mean chugging) beers. Like that time I saw Roger Clemens make his comeback from retirement, via the minor league Lexington Legends.  Man, I drank a bunch of Kentucky Ale at that game.   So in honor of Opening Day earlier this week, here is my ultimate 6er for baseball season.

1. Steamworks Colorado Kolsch. Kolsch is a german style ale that is light and crisp, but with more depth of flavor than German lagers. Steamworks knocks it out of the park with their take on this classic style. Hop-forward and refreshing, this beer is always in my batbag.

2. Budweiser. I know, I know. A bunch of people give me tons of shit for liking this beer, but hey not that long ago, you couldn’t even get a Blue Moon at any ballpark besides Coors Field. And it is THE beer of baseball. If it is good enough for Joe Nuxall and Harry Carey, then it is good enough for me.

3. Great Divide Colette. This American take on a Belgian Farmhouse, once a seasonal now available year round, is a great spring beer. It has malt richness and yeastiness of a true Saison, but is still light enough on the palate to drink on the hottest of days.

4. Santa Fe Happy Camper IPA. This canned IPA is 1 of the best deals you can find on craft beer. Intense hop notes, yet not overpowering, with a light malt base make this beer an enjoyable IPA for all seasons. Plus, it is in a can and therefore it is perfect for that late softball game or the tailgate before the doubleheader.

5. Deschutes Chainbreaker. The fusion categories in craft beer keep expanding. This White IPA, combing Belgian style Witbier and American IPA, is a thirst quencher during those afternoon games when the sun is at its highest. Try it at your next picnic or day barhopping loop.

6. Full Sail Session Lager. The stubby bottles remind you of that Jamaican beer, but this American lager don’t need no lime or reggae band. Crisp and easy going, this beer is a must have during the baseball season.