A picturesque sunset graced the backdrop as the last note of our Nation’s Anthem echoed out of the stadium walls and into the parking lot where hundreds of fans, me included, stood in line waiting to enter Crew Stadium. Security was tightened for this rivalry match between the United States and Mexico, and on the eve of 9/11, both patriotism and precaution were heightened. It looked as though our chances of getting to our seats by kickoff was setting with the evening sun. And then…an omen. An “official-looking” man in the standard yellow ”EVENT STAFF” shirt informed us that another gate was opened up and had no line. Fueled by IPAs and the spirit of Uncle Sam, we sprinted a quarter of the way around the stadium, thru the security, snatched up our free commemorative scarves, and made for our section as the whistle blew to start the game. We made it (not quite made it in time for kick off but we were there). Not a 400 mile road trip on a school night, nor the 45 minute wait to get in the gate, or even the half marathon at Olympic pace we had to run to get to our seat could deter us from cheering on our Yanks on the hottest September day in 30 years in Columbus.

Our tickets were for General Admission seating, which is a euphemism for anarchy. No seat numbers, no rules, no ushers…no problem. As soon as I set eyes on the surging, chanting masses of red, white, and blue-clad fanatics, I knew this was either the section of the stadium reserved for mental patients from the local hospital or the uber fan. Not sure into which category I put myself, but either way, I was home. 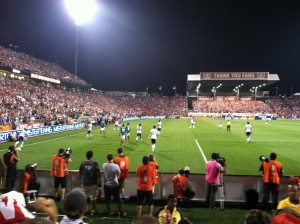 The first 20 minutes on the field were a bit shaky for team USA, but senior National Team member and goalkeeper Tim Howard’s sangfroid between the pipes settled the team down, and we, the crowd, kept them going. A constant barrage of chants rained down from the stands “YOU-ESS-AY! YOU-ESS-AH!” sending chills down this sports fan’s spine that I have only been privy to two other times in my life – when Todd Benzinger caught the final out of the 1990 World Series and the first time I stepped foot into Wrigley Field.

Halftime saw the teams deadlocked in a 0-0 tie, but after weathering Mexico’s early chances, the US was now settling in, creating scoring chances, and pressing the Mexico defense. Good things were on the horizon for half number two. And, like the US team, we had some halftime adjustments to make as well. All good sports fans will tell you that your actions affect the outcome of the game. No goals in the first half meant we needed to change up. Not that the projectile vomit and near fights between young men and old men wasn’t appreciated; it was. But, we wanted more action, and decided that finding seats at the other end of the stadium (where the US would be attacking in the second half) was in the best interest of the team, the nation, and (of course) us. 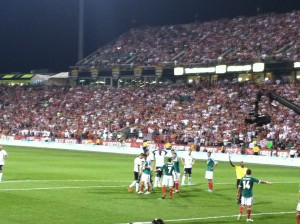 We were able to stroll all the way down to the front row of the General Admission on the opposite side. No one said a word, and we were welcomed with high fives and boozy hellos. Again, an omen. Something or someone wanted us to be there. Call it fate, call it karma, call it superstition, call it intuition, we sensed that goals were coming… And less than five minutes into the second half, Landon Donovan served a perfect corner to Eddie Johnson who buried a header with the goalkeeper off his line. 1-0, USA. Our new section mates moshed like a Ramones show, swung their scarves, waved their flags, and broke into song. “Oh when the Yanks, go marching in…”

With the scent of blood in the water, the US continued to attack, and the fans feasted on the team’s energy ramping up chants and cheers from intermittent to constant. About thirty minutes later it was Donovan again, this time on the receiving end of a deflection from Clint Dempsey to put the Yanks up 2-0. Celebration ensued! New chants “dos-a-cero” and “We are going to Brazil” (along with “You’re not going to Brazil”) filled the last ten minutes, as elation was the vibe from the masses.

The magnitude of the game was tangible, as both teams were fighting for their World Cup dreams. If you are not a soccer fan the USA/Mexico rivalry is the equivalent of the Red Sox/Yankees or Ohio State/Michigan. Think if those teams were playing for a final World Series spot or a BCS title bid (respectively), and that is what you had last night. But since it is a national team, it is more than that. There is a certain “us vs. them” mentality. They are expected to be better at soccer because it is the national sport in Mexico; it is a religion in Mexico. Our loyalties to soccer (as a country) are spread out, as other sports are more popular, but we love getting behind our nation, and soccer’s following is growing. As a lover of all sports, I can say that I often enjoy the spectacle of the sporting event as much as the sport itself. Going to games where the crowd is active, creates a whole new dimension. If you want to sit in a seat, if you want to dissect the game watch it at home. If you are paying the (high) price of admission then get into the cheers, the chants, the boos, and the bravos. Lose your voice, spill your beer, belittle the officials, stand the whole game, and celebrate like a lunatic when your team emerges victorious.

With a 2-2 draw between Panama and Honduras, the United States clinched a spot for the 2013 World Cup in Brazil. And I can now say that, I was part of that number, when the Yanks went marching in Columbus. 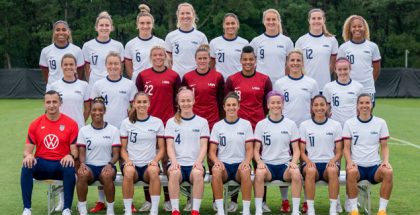