Back in my day, we just called watching bad TV a “guilty pleasure.”

Sunday night, I finished season two of the HBO drama “The Newsroom,” written by Aaron Sorkin. No spoilers here, in case some of you are still waiting to see the finale or have forgotten your friend’s HBO Go password. But the reviews from my friends, roommates, and co-workers who watch the show all have two things in common:

The phenomenon of “Hate-Watching” is nothing new. Since entering the popular culture lexicon, “hate-watching” has been deployed by TV viewers to explain the experience of continually watching a show despite claiming outwardly to dislike it. Friends of mine have admitted to tearing through some shows at a rate of one season per week via Netflix streaming. But in the same breath, they’ll declare, “But I’m really just hate-watching it, because it’s honestly such a dumb show.”

I admit there are shows I watch with which I can find fundamental problems that bug me and which never go away. I watch “Girls” (Hannah is a narcissist who lacks self-awareness, features I feel may be more applicable to creator Lena Dunham than she’d care to admit).

I watch “Parenthood” (it’s the most tearful kind of melodrama).

I watch “The Newsroom” (The staff of the show’s fictional news program are self-important elitists, and the show serves to make everyone who disagrees with a particular worldview look stupid).

I watch “The Walking Dead” (every character on that show really is stupid). To a lot of savvy highbrow TV viewers, I don’t have the best taste.

But HATE-watching? Claiming at water coolers and parties that you feel contempt for something you routinely watch… on purpose? That seems a bit extreme to me.

Let’s use the analogy of music for a second here. I understand music snobs with refined taste knowing the lyrics to the verse of “Roar” by Katy Perry – after all, it’s on the radio all the time, and it’s something people talk about. I get the familiarity. But I don’t think you get to claim you only like Katy Perry “ironically” if you’re buying tickets to her concert. And regular  viewership of a series (or to a more severe extent, binge-watching seasons at a time) is the TV equivalent of front-row tickets to a concert.

Perhaps we’re a generation of TV viewers that’s afraid of being judged for our tastes. So by saying “Yeah, I know the show… I hate-watch it, though,” we get to hedge – Yes, fans of the show, I watch… but NO, detractors, of COURSE I’m discerning enough to see all the same flaws you notice.

If that logic holds true, I could probably get away with some other stuff, too. “Yeah, I eat a lot of chocolate cake… but I hate-eat it.” Translation: “Yeah, I indulge myself like everyone else. But I’m not saying I enjoy it.”

It seems silly to me to do something on a regular basis that you don’t like doing. Equally silly is claiming to hate something that you actually enjoy in earnest. So you hate-watchers out there, go ahead and unplug – stop watching, it’s okay. Or if you think you’d miss the show, don’t be afraid to come out as a fan. Even you, fans of “Big Bang Theory.” I understand. No one – and no show – is perfect.

Despite how many choices are out there on TV and the internet these days, only a few shows manage to achieve a sort of uniform culture-wide consensus on their quality. Any smart and discerning viewer is told that they just HAVE to watch “Mad Men,” because it’s just so SMART!! And yet watching “Two and a Half Men” basically puts you in another social class. Let’s stop hate-watching and just be honest with our choices. Because even if you have your cake, why hate-eat it too when it tastes so much more delicious to savor the good stuff. 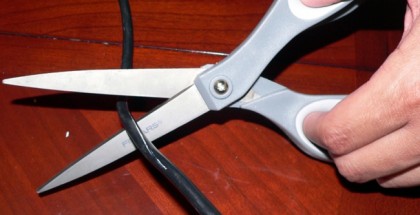