If you haven’t been watching the television remake of the 1995 O.J. Simpson murder trial, The People vs. O.J. Simpson: American Crime Story, get on it! This ten episode FX series depicts the high-profile, controversial double murder trial of the famous football star that took place in Los Angeles 20 years ago. Maybe it’s because the show about someone else who went by their initials, but I am totally captivated by this show. I was too young to have been aware about the trial in real time, so I really look forward to each coming week’s episode. This Ultimate 6er pairs a craft beer with each of the six main players involved in this landmark trial (I’m sorry Christopher Darden fans!). 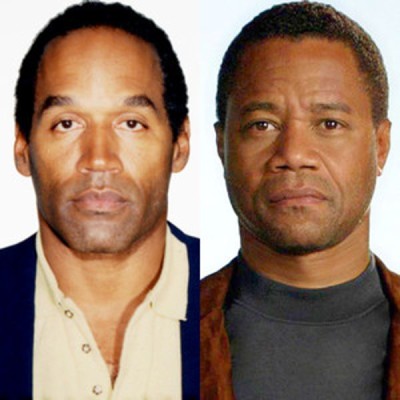 O.J. Simpson (aka The Juice)

This TV series is centered on the ultimate defendant – a famous American athlete. Orenthal James Simpson is a former Heisman winner and star running back for both USC and the NFL. Given that his first two initials also stands for the delicious citrus nectar, commonly referred to as orange juice, O.J. eventually picked up the nickname, “The Juice.” Cue Stony Creek’s Sun Juice is a refreshing Belgian-style summer ale, brewed with orange peel, grapefruit peel, coriander, and chamomile. This juicy beer pairs perfectly with The Juice himself, played by Cuba Gooding Jr. The Juice is clearly a complex man, with some sweetness but saison yeast and the spices give the Sun Juice just enough of a kick to capture O.J.’s less-than-savory side. 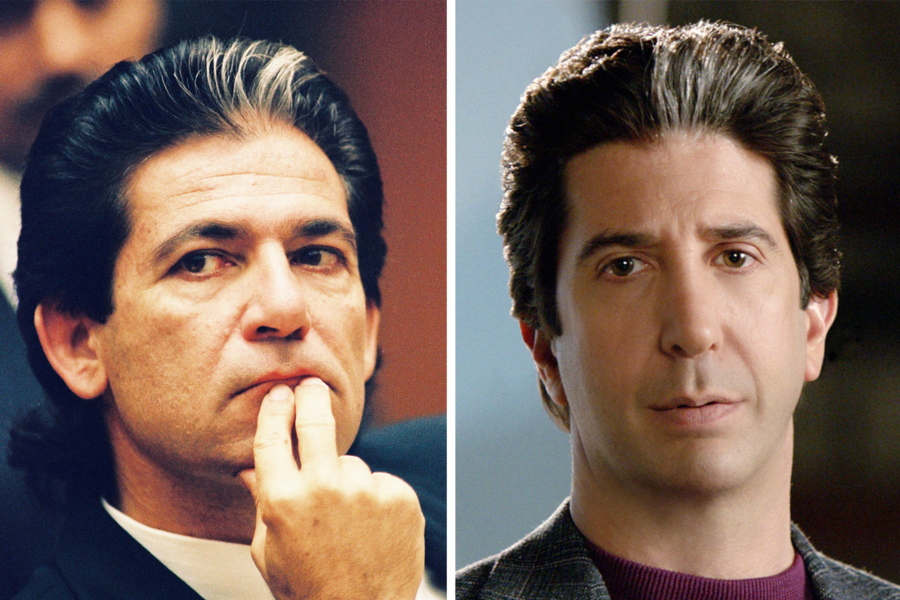 While my first reaction to seeing David Schwimmer in this series was “What is Ross Geller doing in this murder trial?”, my second thoughts were definitely in regards to his ‘do. The hair and make up people at Fx did a fantastic job of depicting attorney Robert Kardashian’s white skunk streak. What a better way to accentuate his Pepé Le Pew touch of grey than with a Skunk Black IPA? This Cascadian dark ale by Three Heads Brewing is a nice mix of dark malt and pine-y hops. Spectating Schwimmer swig one of these would on the TV screen just be too meta. 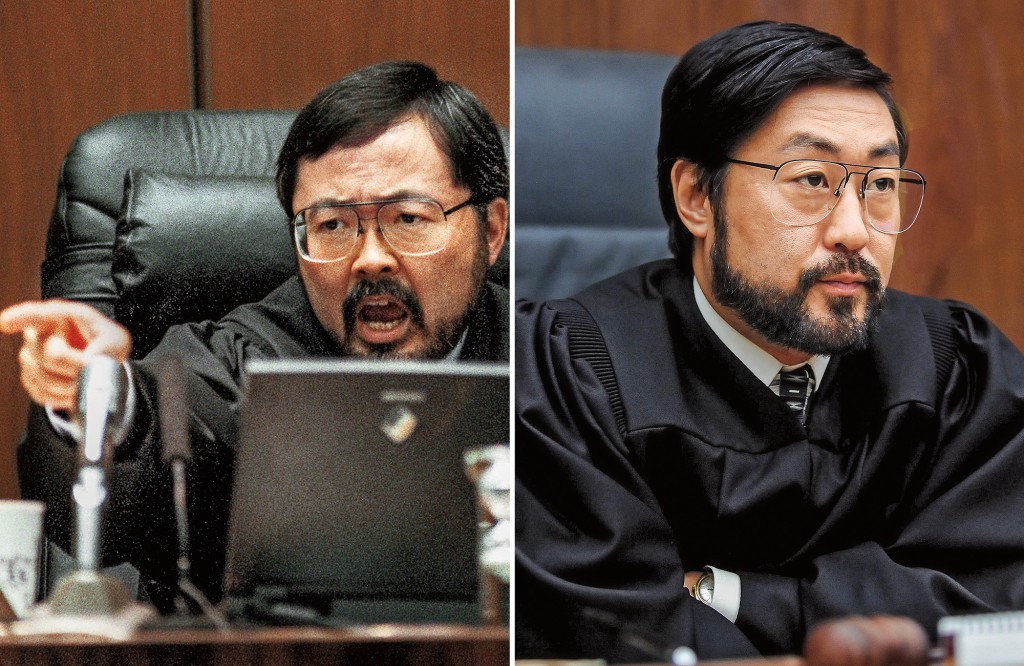 The Honorable Lance Ito has an important role to play in this high-profile homicide case as the presiding judge. He was the one who allowed the trial in LA’s Superior Court to be televised live. Known in the courtroom for calling excessive recesses and letting in a lot of evidence, he is another controversial figure in the show. Judges are known as “gate-keepers” of a trial because he or she gets to decide on all of the evidentiary issues regarding what information can stay out and what can come in. With his gavel in one hand and a Mystic Spectral Evidence in the other, actor Kenneth Choi contemplates the scales of the JUICE-tice system. Spectral Evidence is an imperial stout of the New England variety and is brewed with Massachusetts yeast and malted wheat. 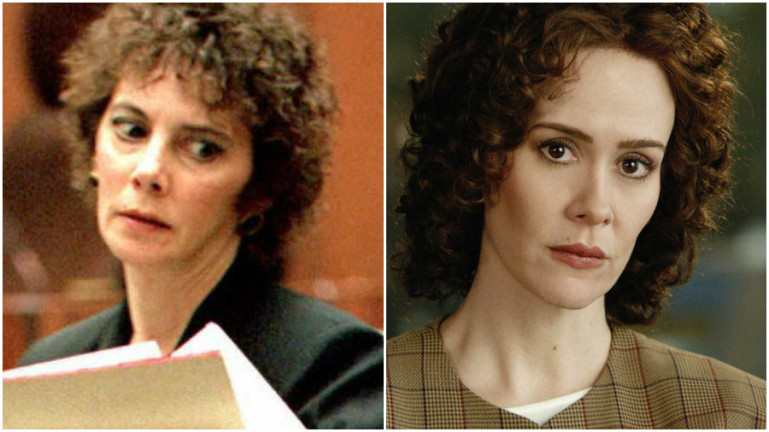 She is not the warmest District Attorney the LA office, although she’s definitely good at what she does. While the tabloids probably fueled the perception of Marcia Clark’s personality more than her actual demeanor, Clark and her comrades were definitely feeling sour after the jury acquitted O.J. Simpson for murder. Mikkeller’s Sour B is a lambic ale brewed with lychee fruit and aged in oak barrels. I’d love to see Sarah Paulson slug one of these sours down and see her surprised, acidic scowl. Given its lambic base, this delectable Danish beer is has been fermented as spontaneously as Marcia’s mid-trial haircut. 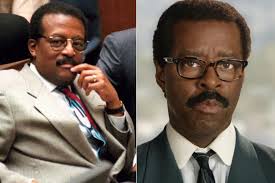 Defense Attorney Johnny Cochran was a go-to celebrity defense attorney. He passionately represented Michael Jackson, Tupac, and Snoop Dog. He also served as P Diddy/Puff Daddy/Sean Comb’s counsel during his trial on gun and bribery charges. Crazy Mountain’s Lawyers, Guns & Money, a heavy-hitting American barleywine, coalesces Cochran’s swagger and his media overindulgence into one fine beer. But be careful, as Crazy Mountain cautions drinking that one too many of these brews, “can result in the shit hitting the fan” and you might need an attorney like Chocran yourself. 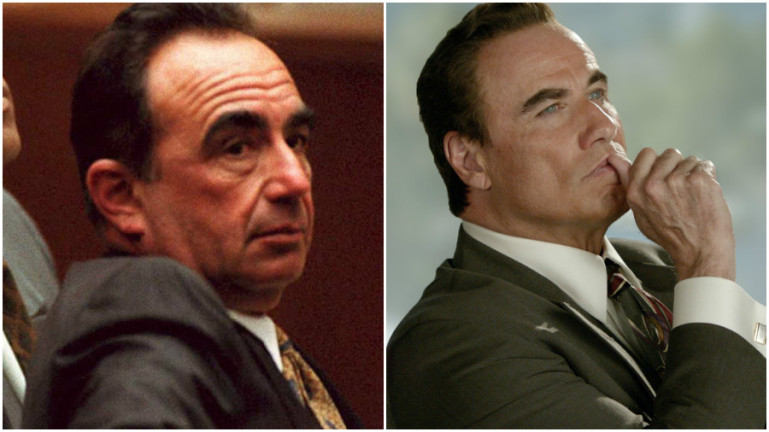 In rejecting the obvious choice of pairing him with an Oompa Loopma-themed beer, I instead recalled Attorney Robert Shapiro’s reputation for settlements. This seasoned attorney played by John Travolta was known for constantly settling cases and orchestrating plea deals out of court instead of taking a matter to a jury trial. A settlement involves the two or more legal parties coming to terms and finding common ground on this case at hand. What a better beer to showcase this non-adversarial approach than Avery Brewing Co. and Russian River’s Collaboration Not Litigation Ale. Years back, when Avery Brewing and Russian River realized they both made beers named Salvation, instead of threatening a potential onslaught of litigation, the two brewery’s founders, Adam Avery and Vinnie Cilurzo, met. The result of that meeting was to create a blend their two beers together: a complex and successful marriage of the two Belgian-style ales. I’d like to think that if Robert Shaprio is involved in any of the trademark disputes embroiling today’s craft beer world, there would be a lot more harmonious settlements.