During the 4th Annual Collaboration Fest this weekend at Denver’s National Western Complex, don’t be surprised when the name Überbrew continues to pop up. The Billings, Montana based brewers are collaborating on four beers this year, an impressive feat for any brewery let alone one based out of Montana. “Collaboration Fest stands out as unique in a sea of very similar festival formats. Not only is Collaboration Fest unique but it has a very special energy and vibe,” says Überbrew “Beer Apostle” Chad Broderius.

Überbrew first participated in Collaboration Fest last year when they collaborated with Adam Glaser and Jagged Mountain on a single malt and single hop (SMaSH) Barleywine. “During the collaboration, we decided that it was such a great time that this needed to be an annual thing,” says Glaser, head brewer at Jagged Mountain. 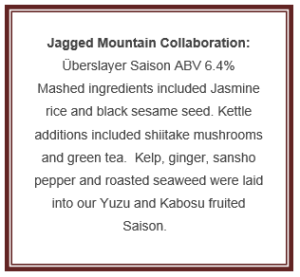 It was that experience coupled with the love the staff at Überbrew has for collaborating that really set the stage for the four collaborations at this year’s festival. “When you visit the great beer towns in Colorado while the brewers are brewing these beers, there is a great deal of buzz and energy. This excitement can only come from an industry with our notorious cooperation and camaraderie. The free flow of information is unique to craft beer for sure,” says Broderius.

Oh, and the universal praise and respect garnered from taking home four medals, including two gold medals, and walking away with the Small Brewing Company and Small Brewing Company Brew of the Year at GABF last year, yeah, that didn’t hurt either.“ We always start the year with the GABF goal of ‘five perfect beers,’” Broderius says. “Everything we do every day is then in the context of the ‘five perfect beers’. Some days are better than others. In 2016, we had some really good days.”

As for his peers, they agree that in 2016, Überbrew had some pretty good days. “Mark (Hastings, Überbrew co-owner) and his team at Überbrew create some of the best beers I have ever had, so it was only a matter of time that they would earn such great recognition,” Glaser commented:

“Shoot, they are doing four collaborations this year in Denver alone. Überbrew is hot!”

As for the other three collaborators, Überbrew has capitalized on their notoriety and success, and fully embraced the “collaboration” aspect of the festival to work with Liquid Mechanics Brewing Company, Comrade Brewing and Two22 Brew. 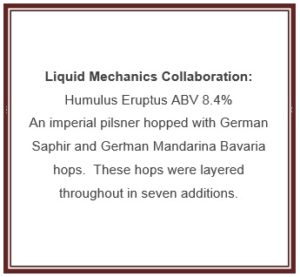 Brewing Company was interested in collaborating with Überbrew when he tried their beers before the awards were announced at GABF “Then they won about 8 billion awards for their beers at the competition,” Helden remembers. “Überbrew already had credibility (before GABF), but winning awards for four out of five beers submitted is a whole different level.  It means they can create world class beers in various styles.”

Among breweries, they are gods,” says Davin Helden.

The collaboration came after Helden reached out to the guys at Überbrew. “They didn’t say yes right away, but said they would visit us,” Helden explains. “They came to our brewery, met us, drank our beer and we hit it off. The chemistry was definitely there. It is difficult to name a better group of guys in our industry. They are humble, brilliant and down to earth. It’s safe to say that we made some lifelong friends.”

That last statement seems to be common theme among those who have worked with the guys at Überbrew, just ask Comrade Brewing’s founder David Lin. “It’s was amazing to work with (Überbrew). Collaboration beers are so much fun and a great learning experience about each other’s brewing philosophies and techniques, (philosophies and techniques) we have never tried,” Lin says. “There is a lot of mutual respect and admiration.” 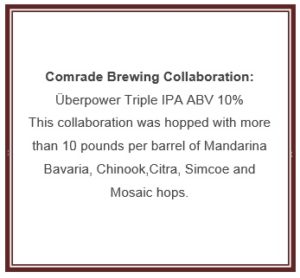 Lin says they first took notice of Überbrew at the prestigious Alpha King Challenge, the annual competition is held during GABF is focused on finding the best “hop-laden beers.” Überbrew won the challenge back in 2015 and had a runner-up finish in 2016, really highlighting how talented and knowledgeable these guys are.

It’s that talent and knowledge that really stood out to Paige Schuster, co-owner of Two22Brew during their collaboration with Überbrew. “The guys at Überbrew are knowledgeable, helpful and definitely willing to pass on their experiences to make great beer!” Schuster explains that “collaborating on a beer with another brewery is more than just the actual brew day–we talk and work together from the planning process, building a recipe, talking about techniques, helping troubleshoot various issues, etc.–so to get to see this entire process from the eyes of other people within the industry is truly a learning experience.”

Schuster and her team at Two22Brew had the best seats in the house when Überbrew cleaned up at GABF. The two breweries’ booths were next to each other and throughout the festival they were able to hang out and get to know each other. “We were able to chat with them and get to know them ‘Before the Awards’ and then got to watch them relish in their moment of glory in the aftermath of the awards,” Schuster remembers. 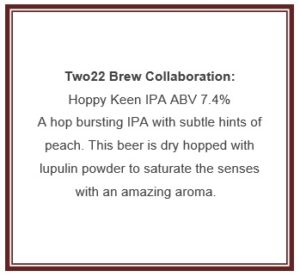 The guys at Überbrew have a true love and passion for collaborating, and their philosophy toward collaborating exemplifies that. “We look to collaborate with brewers that we respect and can learn from. Brewers who inspire us to push the envelope while keeping our brewing honest,” Broderius says.

And for how many is too many, when it comes to collaborating that limit is still in question. “Collaboration beer is the most fun and fulfilling brewing of the calendar year. We will do as many as we can pull off and still keep beer flowing back home.”

This year’s festival is taking place at the National Western Complex on Saturday, March 25.

Tickets for Collaboration Fest are still available for sale. Grab them here.