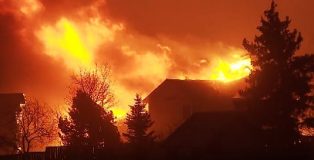 On the afternoon of December 30th, high winds coming off the foothills near Boulder, Colorado interacted with a grass fire, causing reported 40-foot flames. Those same winds pushed the fire forward at a rapid pace, causing an emergency evacuation of the nearby town of Superior, and later on in the day, Louisville.