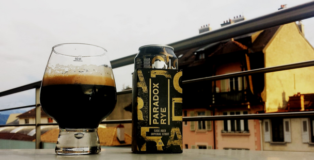 It’s not every day I see a 12 oz. can of beer sold with its own box. It reminds me of drinking a PBR tall boy out of a brown paper bag on NJ Transit. But, that’s Pabst and this is BrewDog Paradox Rye, a 15% ABV cask-aged beast of an imperial stout that, I suppose, gives it the right to be stored in a tiny cardboard container. Coming from the brewers of taxidermied squirrel fame, this could be regarded by many as nothing special, but as per the norm, I am a total sucker for clever beer marketing. Thus, this little box of madness pulled me right in.