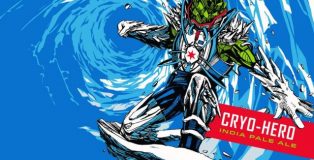 Sometimes you take the best things in life for granted. Chicago’s craft beer foundation is built on excellent ales like Anti-Hero and Daisy Cutter, but they no longer generate the lines and Untappd check-ins of past years. It’s not their fault—Chicago drinkers have so many great craft beer options at their disposal that it often becomes overwhelming. So how do you consistently churn out excellent flagships while appealing to the “newness” decree of today’s craft beer drinker?

One valid option is Revolution Brewing’s Hero series. With taproom-only releases, unique 6-pack offerings and comic-inspired variety packs, the Hero line has helped the city’s largest independent brewer stand out from the fray and consistently provide something new to the masses. Each new offering allows Head Brewer Jim Cibak a chance to flex his brewing muscles in new and exciting ways. His latest notable creation is Cryo-Hero. I spoke to Jim and the Revolution team about the new Hero variant, the complexities of that brewing process and what other exciting beers they have planned for the coming months.