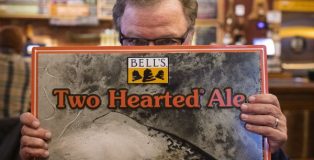 To appreciate the many wild branches of today’s craft beer industry in America, one must take note of its roots. There are few bigger pillars in the American brewing industry than Larry Bell, the founder of Bell’s Brewery. What started as a humble homebrew supply store in the ‘80s has turned into a craft brewing powerhouse that remains a foundational stitch of the modern brewing fabric. A testament to the Michigan brewer’s impact is the sustained success of Two Hearted IPA. Alongside their Oberon Wheat Ale, the unassuming IPA with a fish on the green-hued label is a beer that helped modernize the craft beer scene and helped establish the IPA trend in America. PorchDrinking sat down with Bell’s founder Larry Bell to learn more about the history of the flagship and what comes next.