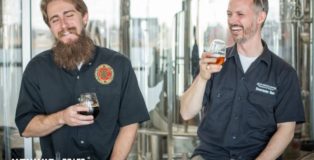 Nevin’s Brewing Company (NBC), located in Chicago’s suburban Plainfield, is a restaurant, banquet hall, music venue and a brewery — and now that brewery has its own name, Nevin’s Draft Company. The “B” in NBC, occasionally got lost in the mix, so the brewing arm of NBC created a new, separate identity. The beer has always been good, but now more people are going to know about it.