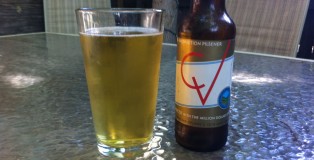 After a long week at work, I felt I needed something light and simple to drink. While pilsners are usually one of styles of beer I avoid, I’ve found plenty of pre-prohibition style beers that surpassed my expectations. When I realized that Champagne Velvet was originally released as a part of Upland Brewing Company‘s 15th anniversary, I was intrigued by this modern take on the early 1900s beer that originally put Indiana brewing on the map.