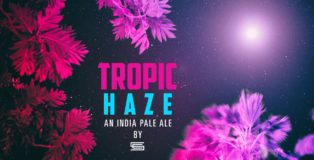 Well folks, Silver City Brewery has done it again. After a busy 2016 celebrating their 20th anniversary, the Bremerton-based brewery isn’t showing any signs of slowing down, instead releasing a new year-round beer onto the market: The Tropic Haze IPA. This juicy brew hits it out of the park – playing into the “haze craze” that is sweeping the nation while also maintaining an element of mystery and allure for the drinker due to a certain, classified ingredient.