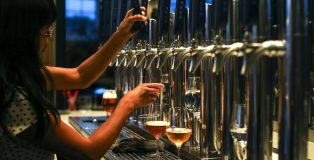 Chicago has always been a weekend destination as people look to explore the city’s rich history, culture and of course, have a slice of deep dish pizza. It’s also now a place where craft beer fans can indulge in the wide array of breweries that the city offers. If anything, it might be overwhelming when trying to think of how to tackle all the breweries within the city limits. Spoiler alert—it would be virtually impossible to visit every single brewery in a weekend.

So if you’re coming to Chicago for a weekend, here’s a guide on how to get the most out of the Chicago craft beer scene in a limited amount of time. Understand that like I said above, it would be virtually impossible to do every brewery, so I had to leave some out. It’s nothing personal and you can alter this itinerary however you like. You’ll also notice that there are no suburban breweries on this list. I’ll be doing another itinerary in a couple of weeks that will focus on just suburban breweries—don’t worry guys, I didn’t forget about you!