Homebrew: Growing Your Own Hops

If you’re already brewing your own beer, you’re probably like me. You care about quality products and aren’t afraid to try doing it on your own and dabbling in new things. I love to cook extravagant meals and have dabbled in building furniture (including boss kegerators), growing a vegetable garden and growing my own hops.

Last year was the first year I attempted to grow hops with a good friend of mine. This year, I’m getting serious. I want to grow enough hops to make at least 10 gallons of a wet hopped beer in the fall. Follow along as a break down growing your own hops.First thing is first, like growing any plant, you need soil, water and a lot of sunshine. Hops like A LOT of sunshine. If you want to try growing them yourself, you need to first be sure that you have plenty of space with southern exposure. Hop plants prefer at least 6-8 hours of sunlight a day. Monitor your growing location throughout the day and see how much direct sunlight the space gets.

The second most important thing in choosing a location is space. Hops GROW. Being a vine they need some kind of structure to grow on. Whether or not this is a fence, vine twine hung from the underside of a roof or garage or a large trellis, anything will work, just plant vertically. Many professional hop farms plan on building structure to allow their hops to grow at least 20 feet up.

So you’ve picked out a location. Great. Pick out varieties. If you live in Colorado, Colorado State University has done extensive research on growing hops in Colorado. Pick a variety that has a high yield and is relatively disease resistant. Also, keep in mind hops that you like to brew with. Local farms in the front range of Colorado do well growing Cascade, Chinook and Crystal varieties. Some growers have also shown success with Centennial. I chose to grow Cascade and may also pick up a few Chinook rhizomes.

The next big decision is to grow them in the ground or grow them in a container. I recommend planing them in the ground as hops build an immense root network and like as much space to expand as possible. However, hops are perennials and while they will die off in the winter, they will keep coming back every year. You’ll have about as much luck digging up an entire hop root network as you would throwing a stone to the moon, so unless you want them forever, keep them in a container. In my case, my landlord nixed the idea of planing them in the ground.

With location and variety in mind, you need to get the seeds. In this case, hop plants are grown from Rhizomes, which is a small root that is cut away from an existing hop plant. Most homebrew stores will do an order for hop rhizomes in the late winter and rhizomes should be planted in the ground in late March or early April. Contact other local hop farms for information on Rhizomes as well. The closest farm to me in Boulder is Niwot Hop Farm.

Upon receiving your rhizomes, get them in the ground as soon as you can after last frost. Even if you experience significant spring snowfall, don’t worry, hops are pretty damn resilient. Bury your rhizomes in loose dirt about 4 inches deep. Mound dirt on top of the spot where the rhizome is planted to help some water run off the mound. Hops like to be moist, but not over-watered. Dig your holes 1-2 feet apart and keep separate varieties at least 3 feet apart. Build your climbing structure and let em’ rip!

In the first week or two you should have sprouts coming up. As they continue to grow, it will be easy to notice which bines are the strongest (the ones that are the longest and the largest in diameter). Take the two or three strongest bines and begin ‘training’ them up your structure. They like to wrap themselves clockwise in the northern hemisphere. All of the other smaller and weaker shoots should be cut back. Continue cutting them back so that all of the energy goes into the strongest bines. After a week or two of training, the smaller shoots will stop growing and the ‘trained’ bines will continue to grow on their own. Water lightly daily. 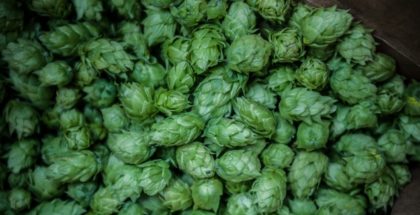