I visited the brew pub shortly after it opened to sample the inaugural releases, and was very surprised not to see the token Northwest-style IPA on tap.  The brewer that I chatted with remarked (and I am paraphrasing) that they were trying to break the “IPA as the centerpiece” model of the NW brewery rollout.  Even as a fan of IPA, I respected the move.  I had a pint of the dry stout and was floored.  It was perfect for the style.  It won silver at the GABF in 2011 in the Classic Irish Style Stout category; a little more than a year after the brewery opened (they also won silver in 2012 in the English Style Mild Ale category for the Session Brown Ale).

Eventually, Breakside did release their IPA.  I happened to be at the pub the day of the soft release, and I admit that I expected it to be mediocre, purely based on the fact that they were not trying to be an IPA-dominated brewery.  I was wrong; it is one of the best IPAs in the Northwest, and that is coming from a total hop head.  They began bottling and distributing bombers of the IPA and Pilsner after opening a 30 barrel production brewery in Milwaukie, OR (just over the Portland border) last January.  They also bottled a India Wild Ale brewed in collaboration with Gigantic Brewing as the official beer of the 2013 PDX beer week.  I have a bottle of their bourbon barrel version aged Aztec ale, a year-round strong amber brewed with dutch chocolate, Habanero and Serrano chiles, waiting to be opened sometime around the holidays; it is remarkable.

I frequent the taproom at the 24-tap Milwaukie production brewery (it happens to be right down the street from my place of employment: total score), especially on Mondays or Tuesdays, when they feature $8 growler fills.  If 24 taps (including a few guest taps) sounds like a lot, it is because Breakside brews A LOT of different beers.  I have heard that they are aiming to brew over 100 different styles in 2013.  The top notch and delicious standard style beers combined with uniqueness of beers on the tap list like the Aztec Ale paint Breakside as one-of-a-kind.  I decided to review an exceptionally unique beer for Porch Drinking; the Smallwares Saison.

Breakside describes the Smallwares Saison as a, “Belgian-style summer ale inspired by a dish at one of our favorite restaurants in Portland; an amber beer made with pink peppercorn, lychee, and Peruvian aji amarillo.”  Smallwares, an Asian fusion restaurant in NE Portland’s Beaumont neighborhood, serves a scallop sashimi with the same ingredients used in the Smallwares Saison: pink peppercorn, lychee, and Peruvian aji amarillo.  The beer is like nothing I have ever tried and I can’t get enough of it.  I sampled the beer poured from a growler filled at the Milwaukie brewery.  The color is a deep amber-copper, with a thin brilliant white head.  The aroma is, you guessed it, extremely fruity and peppery from the the lychee, pink peppercorns and aji amarillo peppers.  There is almost no malt or hop aroma, but there is a faint belgian yeast aroma behind the peppers and lychee.  At 6% ABV and 23 IBUs, it is a very drinkable farmhouse style ale.  It has a very crisp mouthfeel.  The first sip is dominated by the pink peppercorns, and the second is a blend of the lychee and Peruvian aji amarillo peppers.  The spice and heat from the Peruvian aji amarillo peppers lingers faintly in your mouth, and later in your chest, as you drink the beer, much like the Aztec Ale; not overpowering, but extremely complimentary.  The belgian yeast also comes through in the finish.  The complexity of the flavors blend together perfectly to create an extremely flavorful (you’ll taste it for a while after a pint) and unique saison.  The Smallwares Saison is a limited release, and I am not sure if Breakside plans to brew it again, but, if they don’t, take comfort in the fact that they are hard at work creating something just as fantastic and unique as I write this review.  Make sure to grab a beer and the deep fried pickles at the brew pub on Dekum if you are in Portland and a taster tray or two if you make the short trip from Portland to Milwaukie.

**This article was amended 7/26/13 to reflect more accurate information about the brewery’s history. 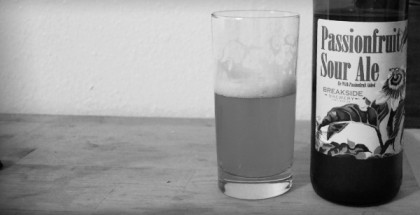