The beauty – and agony – of March Madness is that no one can predict what will happen. The race often goes not to the strong or the clever or the patient… but to the random. So here at PorchDrinking, we’ve come up with a very pop-culture way to pick your bracket.

I have gone through all 64 teams – excluding any play-ins that were not complete by noon Wednesday – and looked up their most famous alumni. This took exhaustive research (by which I mean 64 Google searches and a bit of subjective decision-making). I plugged those famous people from pop culture into the brackets where their alma maters are on the NCAA bracket. And then I went through the bracket, picking the most famous – again, subjective – of the contenders.

First, let me go through the schools and show you who I decided was the most famous person ever to attend that school (yes, I know, some of these academic slackers didn’t graduate…)

Sure, sure, you can disagree on some of my choices. But keep in mind this is a March Madness bracket filled out by an unpaid pop culture writer for a craft beer blog. In other words, it’s all just for fun.

So now let’s dig into these sections and figure out who wins in the more-famous fights. 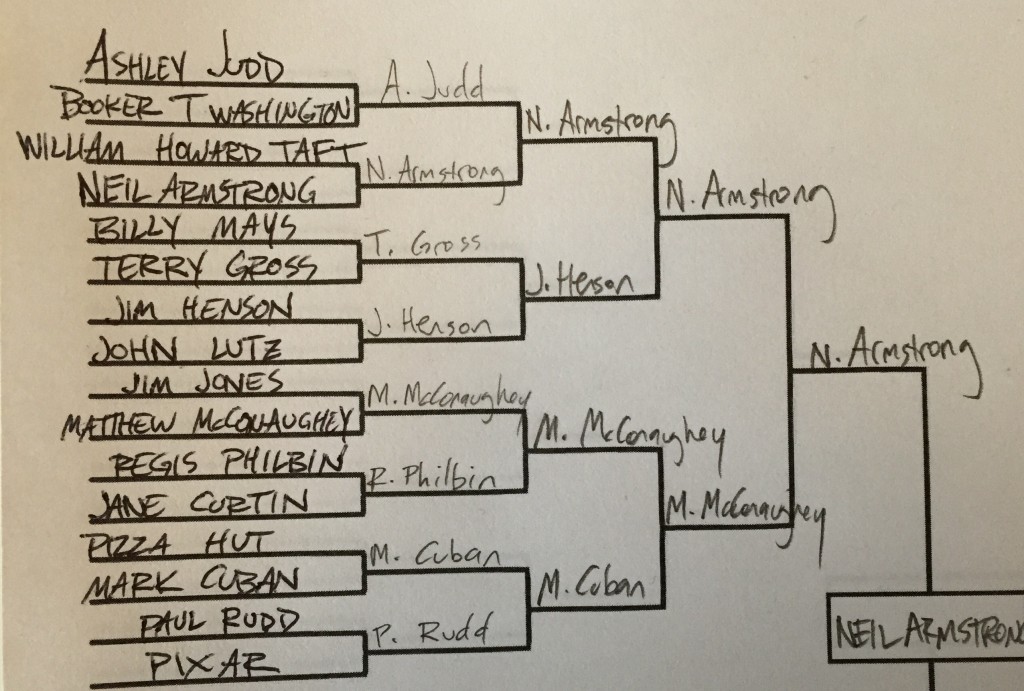 Armstrong is a clear winner here. Good luck finding anyone with a third-grade education anywhere in this country who can’t name the first man to walk on the moon. Some tough defeats for very famous contenders like Regis Philbin and Paul Rudd, but this tournament has a long tradition (nearly two hours now) of recognizing the person who has the broadest appeal. Personally, I was rooting for Maryland alum Jim Henson to make a run for the whole division, but there may be no one famous enough to un-seat the man whose footsteps marked one giant leap for mankind. 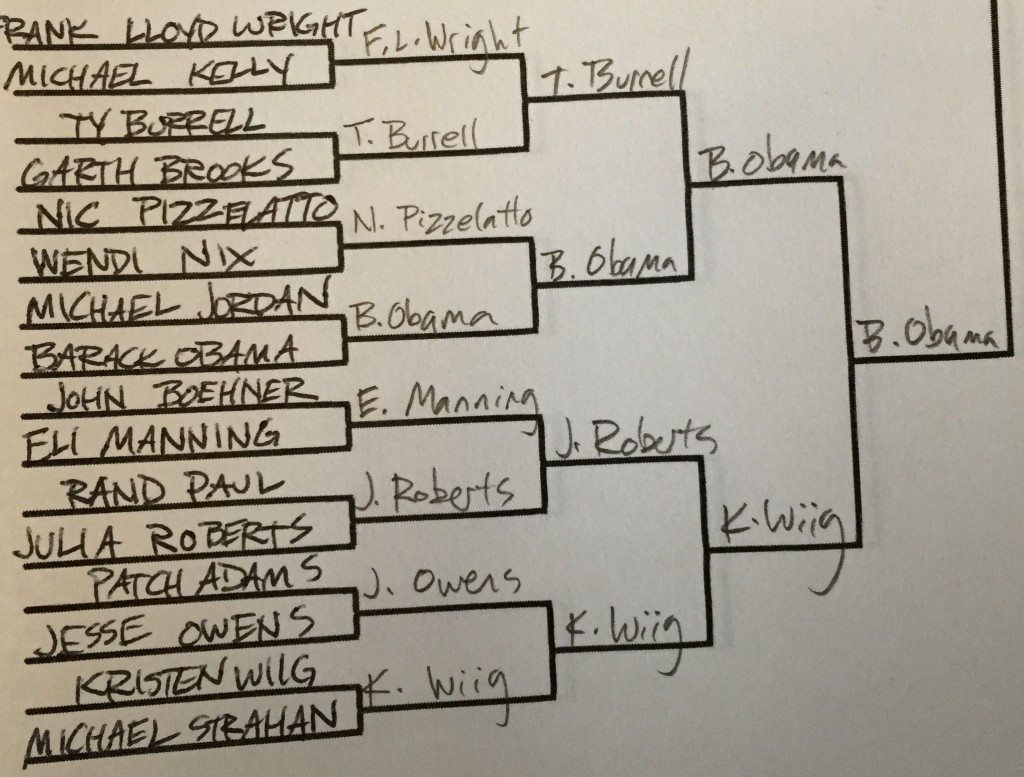 Some tough calls here, for sure. Mega-host Michael Strahan getting sent home early?Michael Jordan losing in the first round? A “Modern Family” star beating the world’ most recognizable architect? Don’t even get us started on that epic showdown between Julia Roberts and Kristen Wiig. But poll numbers be damned, America clearly has a sweetheart here – there’s no one more famous than our sitting President, Barack Obama. Harvard makes its way into the Final Four. 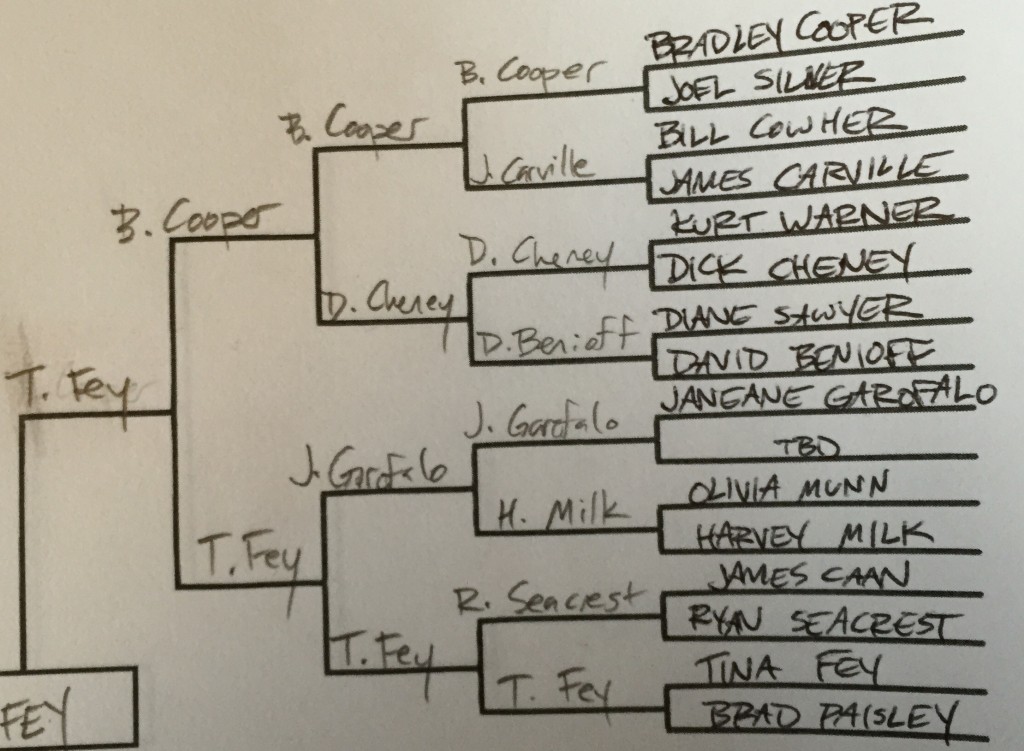 One of the greatest challenges of this tournament came early in the East conference. Who is more famous: Ryan Seacrest or Tina Fey? The recent success of “Kimmy Schmidt” may have helped Fey pull ahead of the “American Idol” host, and even the mega-success of “American Sniper” and all those “Hangover” movies couldn’t help Bradley Cooper beat here. Along the way, you gotta love the match-up between David Benioff of “Game of Thrones,” and Dick Cheney, who served as the inspiration for Tywin Lannister.*
*Not really 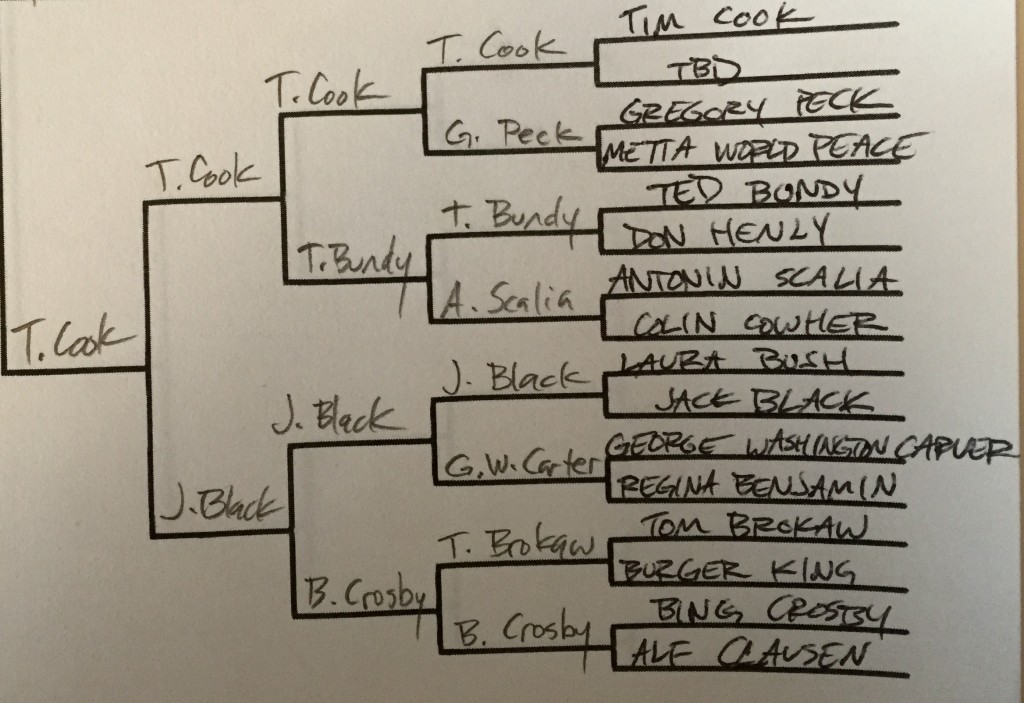 There’s no sugar-coating it. This perhaps the weakest section of this bracket. The fact that we see serial killer Ted Bundy in the Sweet Sixteen is just pitiful. Thank goodness for Jack Black, otherwise this would have been an easy runaway for Apple mogul Tim Cook. After all, nothing says fame like complete ubiquity within the tech world.

Neil Armstrong vs. Barack Obama:
Very tough call here. Each man is known as a trailblazer, an achiever of pretty a pretty significant First in American history. And while some may argue that President Obama is more recognized in today’s lexicon as a pop culture figure, this match-up all comes down to one question: whose name is etched in history forever, regardless of the next 2 years? The answer: Neil Armstrong.

Tina Fey vs. Tim Cook:
Everyone loved iPods, and they’ve evolved to iPhones. Everyone loved “30 Rock,” and now it’s evolved as “Kimmy Schmidt” and all those great Golden Globes shows. These are people who had to make a name for themselves and step out of some pretty big shadows (Lookin’ at you, Steve Jobs and Lorne Michaels). Who has done a better job at becoming a household name? Tina Fey.

Neil Armstrong vs. Tina Fey:
We at PorchDrinking appreciate the contributions of both innovators to their respective fields. But there may never be any contribution to fame than a human being broadcasting on live TV from the surface of the moon. Now and maybe forever (as long as Purdue qualifies), the most famous person in this March Madness bracket is Neil Armstrong.

So, PorchDrinkers, based purely on fame, my bracket looks like this: 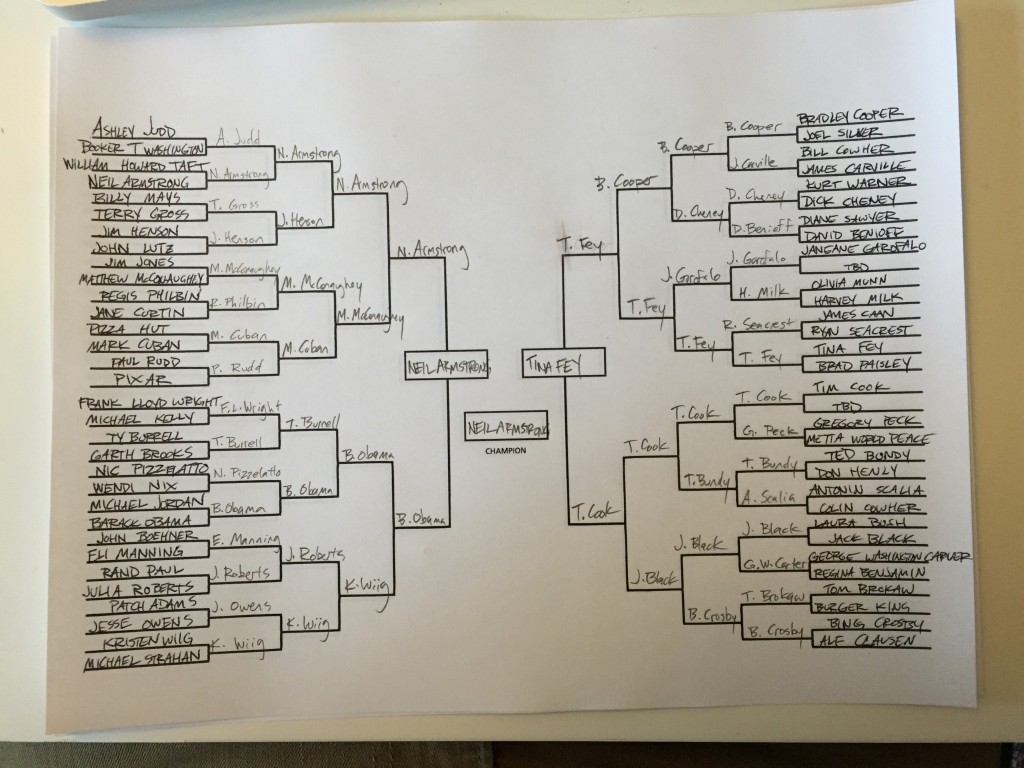 If you go back into SPORTS mode for a second and insert basketball teams over each of these people, you get THIS… your NCAA bracket based on pop culture bracketology: 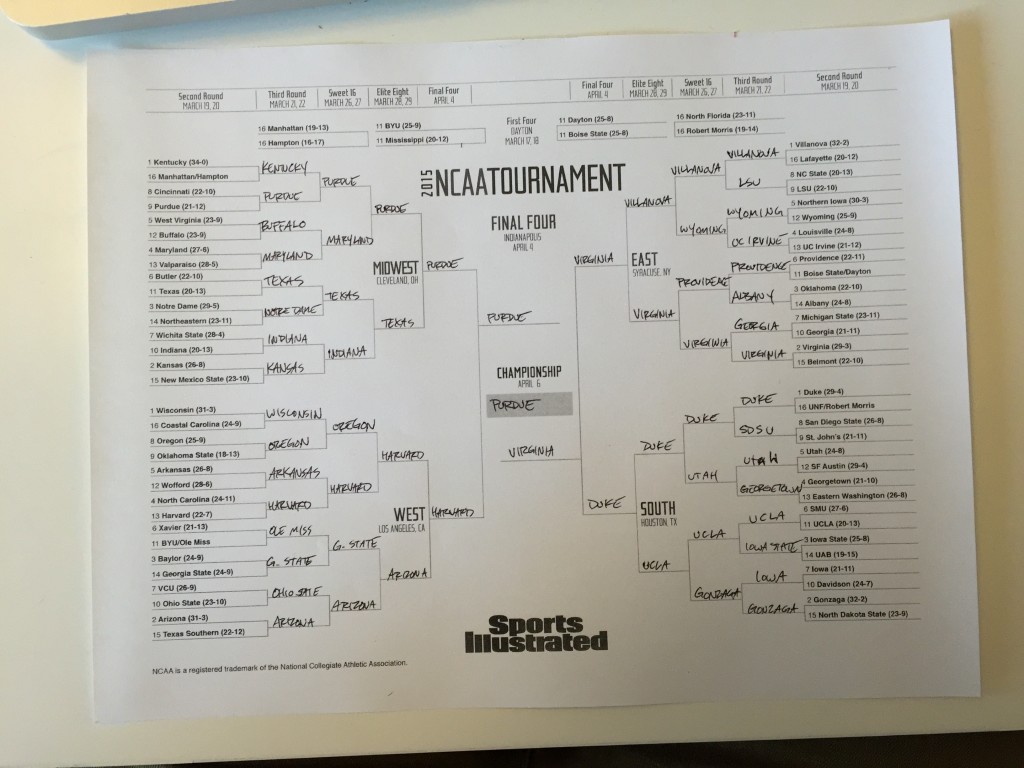 Disagree with my picks in regards to who is more famous? Fill out your own blank fame bracket by downloading the image below: 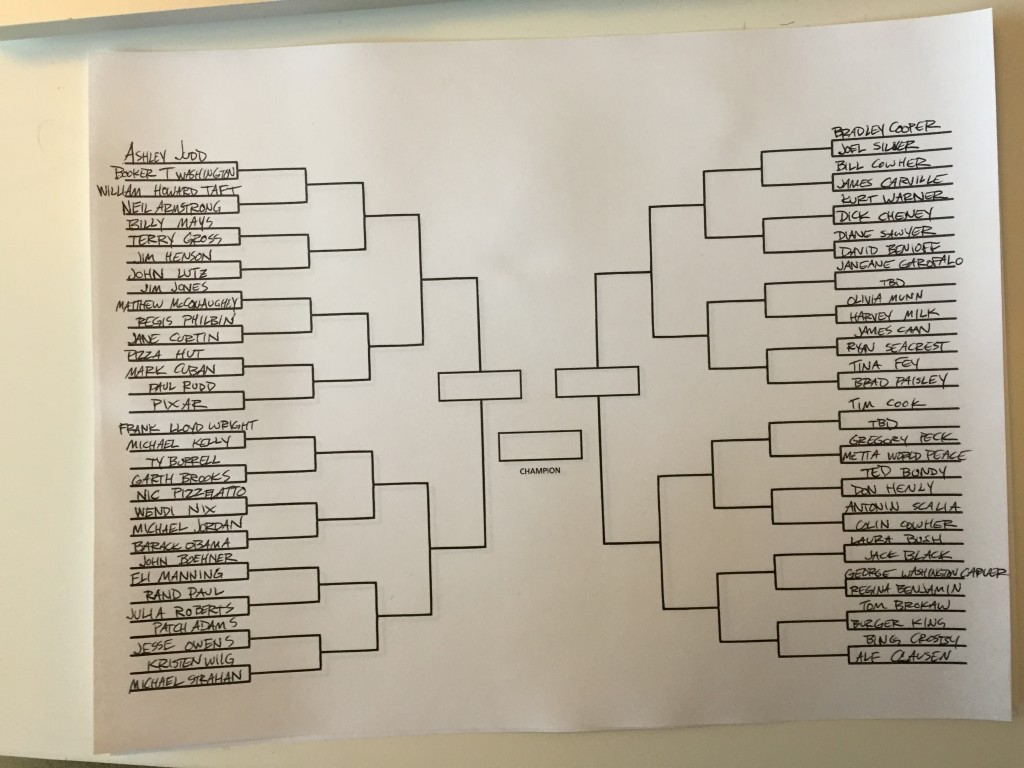 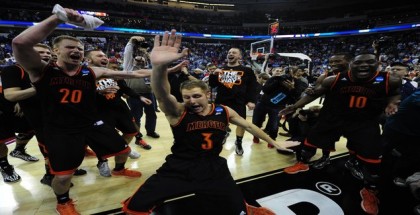