We made it. Bell’s Brewing, Inc. has released the final brew from their Planet Series. Neptune, The Mystic, is the last piece in Gustav Holst’s seven movement orchestral suit, The Planets, and by god is this beer mystical.

It has been a long journey, traveling through the solar system, tasting, talking, and even learning a thing or two about classical music and craft brewing. I’m a firm believer that art and beer go hand in hand. I’m sure there were nights where good ol’ Gustav had a mug of ale in one hand, and his feathered quill pen writing the score in the other. Perhaps he had a little too much by the time the seventh movement came around. Gustav’s Neptune is airy and wondrous. It could be the soundscape to most of the old Sci-Fi movies during space travel. Neptune is the eighth and furthest planet from the sun. The song captures the distance in long enchanting chords ringing out into the darkness. The minor keys play to the cold and darkness that Neptune’s skies most likely portray. However, it is not depressing. It is restful and serene. Holst adds a female choir that enchants and moves the audience towards the end. 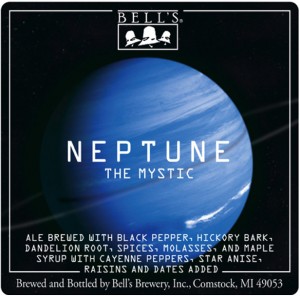 Bell’s Neptune is as mystic as a fairy riding a unicorn through an enchanted forest. I think they may have made up a new style of beer, brewing a “Mystical Stout”, but they earned the title. There is every tantalizing ingredient imaginable in this beer. I could probably open up a restaurant and use exclusively the ingredients listed on the bottle. Or at the very least keep my shelves stocked with them and be one hell of cook. So here you go, are you ready for all these? (Takes deep breathe) Black pepper, hickory bark, dandelion root, nutmeg, grains of paradise, fenugreek seeds, molasses, maple syrup, cayenne peppers, star anise, raisins and dates. Don’t even get me started on the hops and malts, but trust me, they’re there too. Now that’s a lot of ingredients and a lot of flavors to come together to make a drinkable beer. By god Bell’s did it though. The recipe comes from an old home brew recipe of Larry Bell. I can only imagine, Mr. Bell rummaging though the spice cabinet grabbing random spices and saying to himself “These’ll work!”

Neptune pours a dark, motor oily color with little to no head. The maple syrup and molasses adds a lot of density to the beer creating a thick and sweet mouthfeel. The nose is a medley of different aromas. Some people can probably list off each ingredient as being present in the bouquet. The black pepper and hickory are the most prominent on the nose, followed by coffee and roasted malts. The flavor complexity is astonishing. You have the smooth syrupy flavors up front with robust earthy tones from the hickory and dandelion. The finish is where the heat comes in. The cayenne and black pepper leaves a hauntingly spiciness that lasts for quite some time. The evolving flavors throughout the beer assimilate with the structure of Gustav’s last movement. From the subtle smooth beginning, all the way to the unforgettable ending. 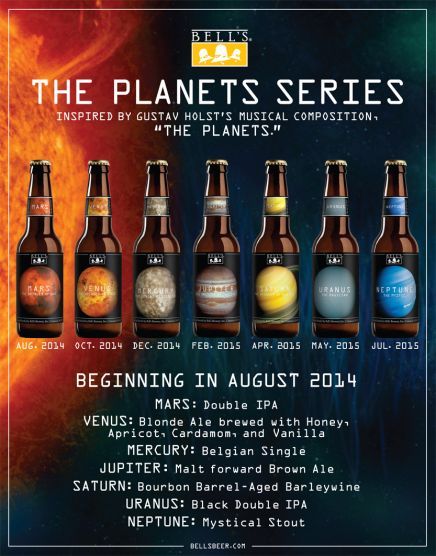 So here we are, at the end of the journey that began with a beer brewed over a year ago. Gustav left his audiences in awe as he ended his performance. It was the first orchestral piece of music to have a fade out ending. The audience literally had no idea what to do. Gustav had a female choir singing offstage in a closet, and as the orchestra faded, they would only hear the faint female chorus, getting quieter and quieter as the door to the room was slowly closed. Vast silence. Bell’s may have captured this same sensational enigma in their final Planet Series brew. They had to go out with a bang, but also shock and impress the drinker. The complex flavors and mystical medley of ingredients was the perfect pairing to the occult choir that faded into the dark. Gone, but not easily forgotten.