Beerology | The History of Stouts

“Studying the history of Porter is like staring into the multidimensional universe of theoretical cosmology, with multiple shifting parallel worlds constantly warping and shifting with the flow of time. The more you try to pin it down, the more it wriggles free and becomes something unexpectedly different.” – Randy Mosher, Tasting Beer

The word “Stout,” originally referred to a strong black beer. According to a letter published in A History of Brewing by H.S. Corran, the earliest recorded use of the word “stout” in describing beer was in 1677 – “We will drink your health both in stout and best wine.”

While many hold the tale that Ralph Harwood of Bell Brewery in Shoreditch was responsible for brewing the first ever Porter style beer, it seems that stouts were truly just strong porters. Thus, we cannot talk Stout until we talk Porter.

The story of Porter begins with the Industrial Revolution in England in the mid eighteenth century. Many farmers were forced off their land leading them to start new lives in urban areas. At the same time, projects to open canals and improve harbors not only would lead to more availability of raw materials and to the opening of outlying markets, but it also led to more thirsty workers. And what did they quench their thirst with? A pint of grog.

In conjunction with infrastructure improvements of the Industrial Revolution, low-cost brown malt was arriving in London from Hertfordshire and was quickly adopted as the standard malt. Even with the addition of new malt, the English stuck with their tradition of brewing beer at different strengths, and the strongest of the beers brewed with Hertfordshire brown malt was aged long enough to take on a slight acidity (likely due to reactions with microorganisms present in barrels), which bar patrons affectionately called “stale.” Despite the public preferring a bit of age on their beers – many asked to blend several ages together for the desired taste – the brewmasters did not agree and began selling off younger “running” beers after fermentation was complete. Those who could afford it began taking up stock in fresh “brown beer” and aging it themselves for a year or more until the preferred flavor was obtained.

“On this footing stood the trade until about the year 1722 when the Brewers conceived there was a method to be found preferable to any of these extremes; that beer well brewed, kept its proper time, became racy and mellow, this is neither new nor stale, such would recommend itself to the public. This they ventured to sell for £1/3/- per barrel that the victualler might retail at threepence per quart. At first it was slow in making its way, but in the end the experiment succeeded beyond expectation,” wrote Obadiah Poundage, a veteran brewer in the eighteenth century.

Brewers in the countryside had long been known for strong, pale, hoppy beers so when they brought these brews to London during the Industrial Revolution, it was, well, revolutionary. The public began craving a hoppier taste in their beers, which further drove the creation of porter. Porter? How does hoppy relate to porter, you ask?

At this time, the invention of critical brewing tools including the thermometer and the hydrometer drastically changed the way brewmasters determined their malt bill. With the hydrometer, brewmasters at the time discovered that their inexpensive base brown malt was mediocre at best in terms of sugar yield, so they began adding slightly higher priced pale malt into their grist. When taxation of beer and malt came about in 1722, brewmasters had even more reason to cut the malt bill and use pale malt for efficiency’s sake.

The move towards pale malt at the end of the eighteenth century, however, led to a great disparity in beer color, as one can imagine, so brewers began experimenting with the addition of burnt sugar. Not only did this alter the flavor of the beer, it was also considered illegal by the English government due to the perceived evasion to the malt tax. In 1816, the use of caramel coloring was banned by Parliament.

The following year, in 1817, Daniel Wheeler invented the roasting kiln, which led to the creation of black malt. Huge breweries like Barclay Perkins and Whitbread took advantage of this newfound black malt and for the first time, created a product that was truly black, no additives needed.

Around this time, there is evidence that Guinness began labeling one of their products “stout.” Ray Daniels writes in Designing Great Beers that the Guinness product line included two porters, designated X and XX, and a stronger third beer reserved for export to the Carribbean. The XX porter was later renamed to Guinness “Extra Stout Porter.”

Around 1820, “stout” emerged as a standard term for a beer that was slightly different than Porter.

“Somewhere along the line, porter drinkers began to distinguish stronger examples with the adjective ‘stout,’” writes Ray Daniels in Designing Great Beers. “A patron might enter a pub and say, ‘Give me a stout porter, bartender,’ in much the same way one might ask for a ‘hoppy pale ale.’”

As such, the term “stout” became slang for strong beer and many breweries throughout the 18th century featured a pale stout and a stronger beer called “stout porter,” which would later shorten its namesake to “stout.” 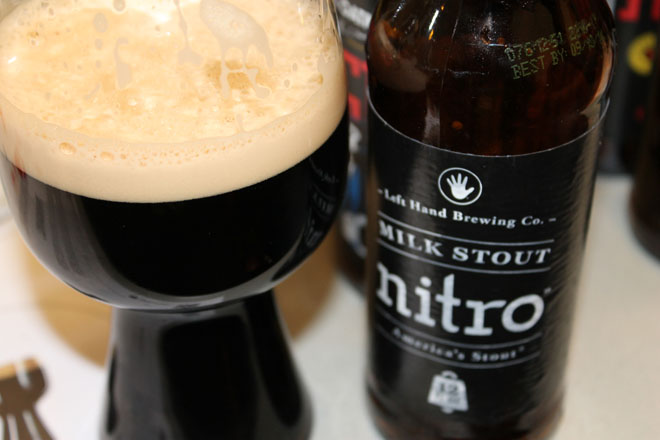 So now that we know the background of Stout, what were the traditional Stout beers? There are five: Dry Stout, Sweet or Milk Stout, Oatmeal Stout, Foreign Stout, and Imperial Stout.

While now often termed Irish Stout, traditional Dry Stout originally came about from attempts to dodge the malt tax bill in eighteenth century London. As unmalted barley was not taxed the same as malt, brewers began using more in the grist. Still used in modern recipes, this raw, unmalted barley lends a sharp coffee bitterness and a creamy mouthfeel.

In the twentieth century, Stout had dropped off in popularity and was said to be a drink for invalids, according to Tasting Beer. It had also become sweeter through the addition of lactose sugar.

Another twentieth century development included the addition of malted oats to Stout malt bills. Lending a soft, creamy mouthfeel and a distinct nutty flavor. Once considered nutritious, the British adopted Oatmeal Stout as part of a healthy diet, drinking it quite regularly.

Originally, this style was a strong stout and was considered a luxury item. Once copious amounts of Extra Stout began being exported to British territories at high rates, it garnered the name Foreign Stout.

While stronger than Extra Stout, the term “Imperial” came about in the eighteenth century due to this style’s popularity with the Russian monarchy.

“Guinness is Good For You”

Not too long ago in Ireland, pregnant women were recommended to drink a glass of Guinness every day to strengthen themselves and their baby. Little known fact, the polysaccharide in barley can help stimulate prolactin. While the brewery has gone on the record denying any health claims, a study by the University of Wisconsin showed that Guinness might help reduce the risk of heart attacks and blood clots because it contains the same types of antioxidants found in red wine.

Stout, more specifically Guinness, used to be prescribed for post-operative patients due to its iron content.

In Africa, Guinness seems to be considered an aphrodisiac and is sometimes nicknamed “Viagra.” Currently, 40% of the world’s Guinness is brewed in Africa and Nigeria is the biggest market for the beer, falling just behind the United Kingdom.

So get yourself a pint of Stout! It’s good for you, it has healing qualities, and it will amp up your libido. These statements not approved by the FDA, or anyone for that matter.